Hello, everyone. I’m looking to connect with some discerning ladies and gentlemen.

I don't make a good texting buddy, but I'm an exemplary companion and a skilled masseur. Have a look at my reviews.

All I ask is that you read my profile in its entirety prior to reaching out to me. It's difficult for me to take people seriously when they don't.

1. Donations are for time and companionship. I accept cash, Venmo, Google Pay, PayPal and Skrill. Anything that may or may not happen is a matter of personal choice and personal preference between two or more consenting adults of a legal age, and is not contracted for, nor is requested to be contracted for, or compensated for in any manner.
2. Cam-shows require a 100% deposit at time of booking. Recording in any manner is strictly prohibited without my express written permission. By contacting me, you agree to these terms.
3. I reside in downtown St. Louis, MO and Fishers, IN.
4. Please book a virtual verification prior to booking an outcall or extended engagement. Does not apply to existing patrons.
The virtual verification donation is deducted from the outcall/extended engagement donation.
I offer a 25% extended engagement discount if you come to me or reside nearby. Does not apply to incalls or outcalls. 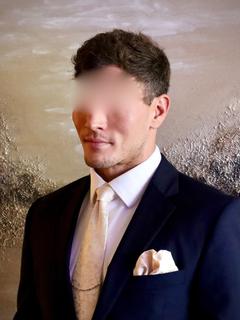 No blocked calls and fake numbers
Into men and women

It was much easier to book my second appointment. He’s still a slow texter, but he’s considerably more responsive than before and I no longer receive auto replies or questionnaires.

Our meeting was superb.

“Best bachelorette present ever!” Thank you for taking care of her, stud!

It was a bit of a hassle to book an appointment, but he was worth it. He's the best I've hired so far.

Scheduled cam session. To start, stunning: personality, body, face. Liem is a totally engaging man. Really enjoyed meeting him! He makes you feel good, positive energy. Hope to meet up with him soon.

Our trip was splendid. He has his quirks, but I appreciate them.

Appearance:
The other reviewers aren’t over-exaggerating. If Superman and Ken could procreate together, this is their son. His cheekbones are out of control.
Ask him to show you his creepy sloth expression.

Demeanor:
Think James Bond, with a touch of comedian and philosopher. Liam truly is a badass. I genuinely believe he’s on another level and I hope he chooses to move to a real city some day. He could conquer the world, if he set his mind to it. He just needs to surround himself with the right people.

Extra-curricular activities:
He can be a bit cocky at times, but he backs it up. You won’t be disappointed.

Hygiene:
He’s a bit excessive, but I can’t complain about something like this. Expect him to spend a bit more time in the bathroom than most men do.

Miscellaneous:
He sends you a health questionnaire before meeting and checks temperatures upon arrival. I greatly appreciate and respect him for this.

Considerations:
It takes him nearly two hours to get ready for the day and another hour or two to fall asleep at night. I’m particular about my morning and evening routines as well, so this wasn’t an issue for me. Just something to take into consideration, when making plans.
He exercises for nearly 2 hours on weekdays and eats 4 meals per day. He prefers to dine-in in the mornings.
He doesn’t drink or smoke, but he enjoys edibles. You’ll enjoy the conversations they induce. He also doesn’t mind playing video games, if you’re into that (and he’s not bad).

Overall, I was very impressed by Liam. He’s a well-rounded man and he has a lot to offer. I’ll definitely be hiring him again.

He asked me to give him an honest review, so here it is. I booked a cam show with him last week and he cancelled on me at the last minute, however he promptly offered to refund my donation. I ended up rescheduling and it was a pleasant experience, but I’m not interested in cam shows. I just wanted to get to know him a bit and see his eyes. I scheduled a trip with him and will post another review afterwards.

In case anyone’s wondering, he’s cool with dinosaurs. I’m old enough to be his grandfather, but he made me feel as if I’m not old enough to break my hip simply by falling down. He looks like something you’d see in a gallery or museum. Could be an alien… He definitely reminds me of superman, but without the butt chin. His sense of humor isn’t quite as distinguished as my own, but it’s easily better than most. Hygiene is impeccable. 10/10 stars

What they said ↓ We’ve checked him out several times over the past year, but always refrained from contacting him because he sort of comes across as, for lack of a better term, an a**hole. On the contrary, he’s super chill and friendly. He’s just a busy guy and constantly receives messages from crazy people.

He doesn’t like to share photos before meeting, which caused us to further hesitate, but rest assured that he’s very good looking. Like, ridiculously good looking. He’s also super hygienic and cautious. Dude had a contactless thermometer and UVC light for our phones and keys sitting on the counter when we arrived, Hibiclens and various mouthwashes and tons of other products in his guest bathroom, and a HEPA + UVC air filter in every room. It’s hard to stay anxious around this guy, he truly is a gem.

Don't let his stern undertones fool you, he's a total sweetheart. Enjoy him while you can. It's only a matter of time before someone puts a ring on this one's finger

Lord have mercy! It hasn't even been a week and I'm already planning a vaca with this young man, he is addictive!

Very sweet guy, he made my day.

I hired Romani to pose as my fiancé and he did an amazing job! His cover story was on point. My family loved him, my friends were impressed and my coworkers were sooo jealous. We ended our evening in private and, let's just say, it was hard to let him go home! Man knows how to cook a mean breakfast, too. I highly recommend him!

I met up with Master Romani several times in the past, but I just recently discovered how open He is. I always kept our sessions vanilla, out of fear of scaring Him away, but boy does He know how to amp things up! Don't hesitate to tell Him what you're into; chances are, He can accommodate it.

Romani never fails to surprise me. I went to his place this time and he made me feel as if I was at a 5-star hotel. Pleasant temperature, pleasant lighting, pleasant background noise... His guest bathroom blew my mind! It's a bit on the smaller side, but it offers everything that any man or woman could possibly need and there wasn't a single speck of dust in sight. You can tell he puts a lot of time and effort into ensuring his guests are comfortable.

He's going to hate me for saying this, but, while his new photos are unquestionably sexy, I still don't feel as if they do him justice. If any photographers browse this site, he would make an excellent addition to your portfolio

This is my third time seeing Romani and it gets better every time. I've never had a retainer before, I've always preferred variety, but I can see myself visiting this particular stud on a weekly basis. He has the body of a young fitness model and the brain of a mature gentleman. His face, and other assets, are to die for. Again, I urge him to get new photos at his earliest convenience. His current ones simply don't do him justice

I don't know what to say that hasn't already been said. He far exceeded my expectations. My only recommendation is that he updates his photos. He's so much better looking in person that I didn't even recognize him when he showed up.

The coolest thing about Romani is that you can introduce him to your friends and no one will suspect a thing. He's involved in many industries and he isn't joking about the complexity of his cover stories!

He dresses to impress, without being flashy, he's a gentleman, and he knows how to please both men and women. My wife and I haven't had this much fun in years.

Above all, Romani isn't merely companion material, he's family friend material. I'd trust this man with my children, and I mean that.

Grey is the perfect gentleman. It took him a bit longer than I expected to respond to my messages (nearly 3 days), but, when he did reply, his eloquence and tact took me by surprise—so much so that I became skeptical (and didn't hide it)! He dissipated my anxiety by suggesting that we meet at a public venue of my choosing, with no obligations on my behalf. I still wasn't fully convinced, but I'm very glad that I took the chance.

For starters, the car he pulled up in was quite impressive for his age. When he got out of his car, I almost choked on my own saliva! Perfectly-fitted attire, stunning face and physique (I immediately noticed his tight bubble butt and generous bulge), sexy sunglasses, sexy shoes... Sexy everything! He even picked up a piece of trash off of the sidewalk and remembered to use hand sanitizer afterwards! He approached me with a charming, almost cocky, smile, took my hand, and greeted me with a playful kiss. I began stuttering like an unnerved little school girl and was so embarrassed that I wanted to die, but he skillfully put me at ease by sharing a couple embarrassing stories of his own. Next thing I knew, we were lost in deep conversation and, for the first time in over a decade, I didn't have a care in the world.

After lunch, we went shopping—and he loved it! He has exceptional taste, he wasn't afraid to tell me when he didn't like an outfit, and he made me feel like a Goddess. We went for drinks afterwards, but I barely finished my second glass of wine before I couldn't keep my hands off of him any longer. He took my hand, gracefully led me back to my room and... Words cannot describe his skill and stamina—I've never felt such ecstasy!

As if my weekend wasn't already perfect, I was positively glowing when I went to my conference Monday morning and everyone was very impressed with my presentation.